Love For The Least 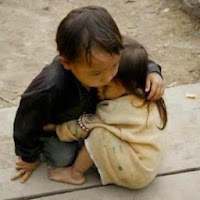 (Photo courtesy of: compassionatehope.org)
“While Jesus was having dinner at Matthew’s house, many tax collectors and sinners came and ate with him and his disciples. When the Pharisees saw this, they asked his disciples, ‘Why does your teacher eat with tax collectors and sinners?’“- Matthew 9:10-11
The past few days have been filled with a lot of criticism of my former employer, World Vision. I take a lot of pride in saying I worked for such an awesome organization built upon the faithfulness of one man willing to help an orphan.
The organization was founded by Bob Pierce, a man who was convicted to serve the widow and the orphan; the poor and oppressed; and to be a voice for the voiceless. His heart was focused on the call of Christ to serve the least and the lost and to this day the desire of the organization is to continue in that direction.
Now, to the polarizing decision that created a social media frenzy, of which I have been reading several articles and posting them for people to read. I have avoided sharing my personal opinion, until now.
According to washingtonpost.com, Rich Stearns, the president of World Vision, shared the purpose behind the decision to allow employees to have legal same-sex marriages by saying “We have not endorsed same-sex marriage, but we have chosen to defer to the authority of local churches on this issue.”   Simple enough, right? WRONG!
This made the church more upset, split Christians across America, and created even more separation between the church and the world around us. Some have rejoiced at the fact that they changed their decision, but others are experiencing frustration and anger towards the evangelical church that rose up to put pressure on the organization.
It got me thinking, what would Jesus say? Well, it turns out, this isn’t a hypothetical question at all.
Jesus was going to eat with a tax collector and the church leaders said “how dare He! Why would He eat with those people?”
Jesus had a tax collector walking with him in His group, doing His work, all while that individual (Matthew, you know the guy who wrote the first Gospel book) was still trying to figure out what this whole movement meant.
There was an interaction with a woman caught in adultery where Jesus said “Hey?! Can anyone here say they haven’t sinned? If so, feel free to cast that stone!” Nobody could.
You see, the point is, Jesus can use anyone He wants to share His message. He is God and we aren’t. The people who were upset over who He put in place to lead made comments of hate and anger doubting His leadership. He was the Son of God and people doubted His leadership decision.
Many church people are willing to point out so quickly what God wouldn’t approve of, yet don’t take heed to His words saying “look at the plank in your own eye before pointing out the splinter in your neighbors”.
So, we won’t support an organization designed to serve the widows and orphans, which is the religion God recognizes as true (Jesus’ half-brother said that), due to their decision to allow a certain group of employees, but we will support a gas station that sells pornography? Will you buy a bike so you won’t buy gas? What about stores that take advantage of migrant workers and their families? Should we start farming on our own?
The point isn’t to point out the plank, but look at what we justify. We are willing to put aside the fact that Jesus said divorce is bad, but we don’t make a fuss in the church when people are getting a divorce. We know gluttony is a sin, but the majority of Church attendees will end up in a buffet. The list can go on and on.
I am guilty of all of these. I love a good buffet. I love getting gas for my car. I could do without shopping, but I like food, so I will go.
Until we are willing to raise up about every issue listed as wrong, then we cannot rise up against one.
Let’s rise up against the injustice, hunger, poverty, hate, anger, violence, the abuse of women and children, political corruption, and more. This is what Jesus would want His followers to do. In fact, this is exactly what World Vision does.

← Connected By Grace
The Pain of Perfection →

1 Comments on “Love For The Least”